THE DIRTY DOZEN IS ALIVE AND WELL

Founded in 1984, the band had to face a difficult period of two years in which they struggled several line-up changes. In the end, only two people, the eventual founders, remained. Edward Buadee (vocals) & Patrick 'pdw' De Witte (drums) gathered around with some of the best musicians in the area of Gent (Belgium).

The band became a group of twelve (!) people, including Peter Heylbroeck on guitars, Jackie De Clerck on bas, Johan Heyerick on keyboards, Yves De Vleesschauwer on solo-guitar and ragga-dub-toast master Prince Far Out.

Back in 1986 the new gang became Gent's most succesfull live band in no time. So they decided to launch a few vinyl-singles (Trip Into The Past & Moving People) in order to convince the rest of Belgium and Europe. But things didn't work out as planned. Still, later on that year they proved to be the best local liveband with several full-house concerts during Gentse Feesten. It felt like a logical next step to record themselves at their best: live with an exited crowd of people.

However, management & record-companies didn't agree. Perhaps because of the unwritten rule that live-albums are supposed to be some kind of 'best-off with an audience' after scoring at least a few hits taken from studio albums.

But SKYBLASTERS did what they had to do and recorded their debut album live at Vooruit Gent. The Dirty Dozen is Alive and Well (in short SKYBLASTERS Live) was released in 1987 and promoted with the single  Johnny B. Goode (a cover-version as made famous by Peter Tosh). National radio-stations picked it up, the album became legendary.

THE BUBBLES OF SUCCES

LIVIN' IN LIMBO & CROSSING THE LINE

SKYBLASTERS performed on every local festival (including Pukkelpop) as one of most wanted bands in Belgium & Holland.

The first studio-album Livin' in Limbo was released in 1988. The single Fallen Flowers took it to the next level on radio & tv broadcast. But still, the opening song, a reggae-version of Ravel's Bolero with an extension to the song Kill Our Pain, turned out to be the most memorial track. As up today, it's still considered a brilliant interpretation of Bolero, worldwide. The band shared European stages with bands like Aswad, The Wailers, Working Week & Black Uhuru. And still, the best was yet to come.

Releasing their third album Crossing the Line in 1989, took success beyond expectations: every hour the singles were aired on national radio, SKYBLASTERS was invited to different tv-shows, they went on tour in Belgium, Holland, France & Germany. The band was working overtime and somehow, it felt relieving when the planned Brazilian tour got canceled. For the first time in years,the members of the band had some time off. Time to evaluate, time to think.

Nobody expected the title of the album to turn out as an omen to the end of SKYBLASTERS. As it appeared, personal lines of moral and emotional strength were indeed crossed. The band decided to quit at the height of success. Each member went their own musical way, leaving a gap in Belgian music never to be filled again. Until Edward Buadee turned 50 in 2004

TRIP INTO THE PAST

Buadee had a special birthday, so he wanted a big party and invited his friends, including the members of SKYBLASTERS. The story goes they gathered around a table and within half an hour the decision for a short reunion tour the next summer was made. They felt like they never took the time to say goodbye to the fans of the previous century and decided to make it up to all of them. And so they did: a brief but powerful period in which old time fans were indulged on a nostalgic trip into the past in 2005 with an almost original line-up of the band.

The successful reunion was ended with the release of the limited edition best of album Now & Then, including three new tracks. It looked like this was truly the end. SKYBLASTERS finally made closure. But someone once said never say never and life has it's own unpredictable way of changing thoughts and things.

IN HONOUR OF (pdw)

On February 19th 2013, co-founder Patrick 'pdw' De Witte had passed away. A shock to all musicians, press and media in Belgium. Not in the least to his closest friends of SKYBLASTERS. A year later, on March 1st 2014, a tribute-night was organized and the remaining core-members of the band were asked to to a small concert. In honor of their friend, they decided to perform with acoustic guitars and no drums. They invited a friend, Martijn Bal, to play the cajon instead. It turned out to be an emotional event, but the audience agreed this should be the start of a new chapter of SKYBLASTERS.

After considering the option, the band of seven brothers in arms played a try-out concert at Charlatan (Gent) on November 9th 2014. Things got clear: this was indeed a very good idea. During the summer of 2015 they played a full-house concert at St.-Jacobs (Gentse Feesten).

The band re-invented themselves in a new kind of reggae-style they call acoustic power. While most popular bands try to create a humble atmosphere during live concerts with an acoustic segment (in order to get closer to the audience), SKYBLASTERS actually started their concerts the same way. But as the set-list revealed itself to a climax, people tempt to forget the lack of amps and drums. Somehow the band  managed to fine-tune the unplugged formula to a new dimension.

THE DIRTY DOZEN IS
ALIVE AND WELL 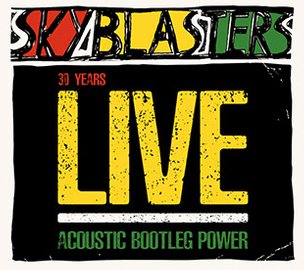